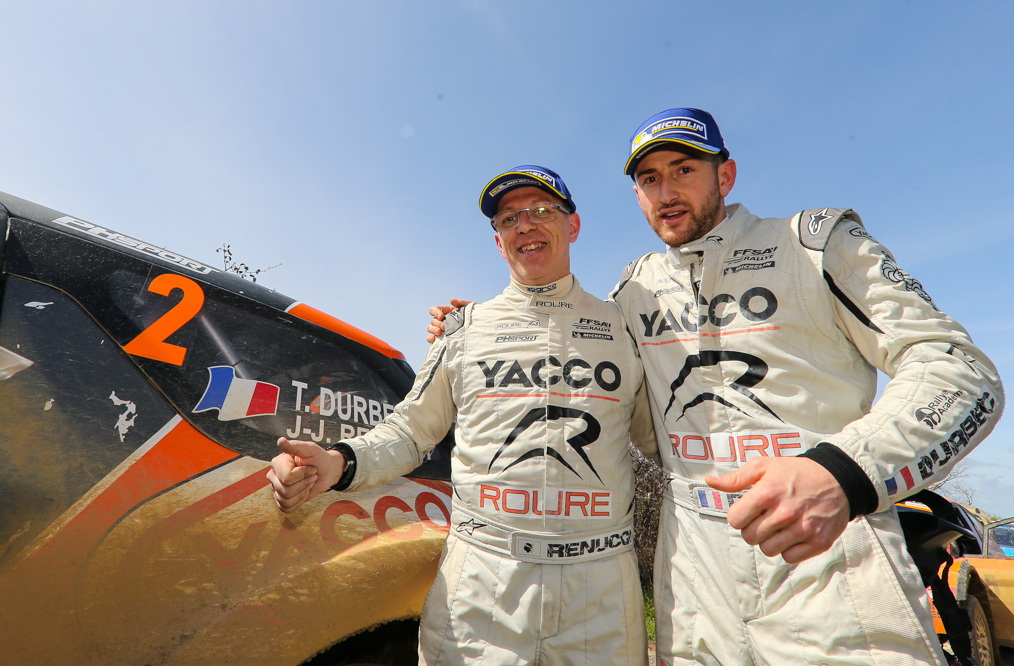 Triumphant in the opening round of the French Asphalt Rally Championship with Stéphane Lefebvre and Gabin Moreau, PH Sport repeats in the Gravel Championship with the victory for the DS3 WRC of Thibault Durbec and Jacques-Julien Renucci on the Terre de Causses Rally, rewarding years of loyalty and shared work.

Having been around rally since he was a child, Thibault Durbec has steadily moved his way up the racing ladder between his debut in the French Championship in 2013 and his maiden win on the national scene.

“I am as passionate as ever, but I wanted to establish a stable professional situation before getting involved’’, said the 24-year old during his first start. “This has allowed me to get the right people around me and build my programme with Éric Fabre, who has been by my side since the beginning.“

“The Touquet Rally reserved a cold greeting for his debut. “France was hit by a snow storm”, he recalls. “My plane was cancelled, so I drove across country only to be welcomed by snowdrifts. Up until then, I thought that all rallies were like the ones I had been to. Antibes, Sainte-Baume and the Durance…So it was quite epic to come across black ice on the asphalt and intersections.”

Following his learning year on asphalt, Thibault Durbec moved to gravel and had a decisive meeting. “PH Sport was set up next to us on the rally. Éric Fabre drove for them and he introduced me to Bernard Piallat to talk about the Citroën Racing Trophy. Bernard perfectly embodies his company. He told us that there were not many spots, but he wanted to work with us. At the end of the year, we got a R3 DS3 for the Vaucluse Rally and we won the two-wheel drive category, which was the perfect result to celebrate the debut of this alliance!”

In 2018, the collaboration begins its fourth campaign and both parties are still on the same page. “I run car dealerships, which is a rather straightforward industry”, explains Thibault Durbec. “I like the discipline and employees who know what they are doing. And this is how they do things at PH Sport.”

Everything is done on time, no detail is overlooked and the personnel are highly-competent. There is the team leader, Bernard, but everyone has their role: Kevin, Corentin, and so many others! In all respects, that’s the best thing. My co-driver, Jacques-Julien is a stabilizing factor. This is a great environment for improving, to become more consistent, and make few errors. While I am not the most talented driver, I have gradually improved to the point of this win in my third Terre de Causses Rally.”

“We were very well prepared with a warm-up rally and a good test session with Christophe, our engineer”, continues Thibault. “I felt good behind the wheel and just had to apply myself. We were first car in the stages from the start to the finish against some serious competitors who attacked hard. Just until the final special stage, we hadn’t thought about the win, but this victory was not by accident. It was built entirely between PH Sport, Jacques-Julien, Eric and I. It was also the perfect occasion to join the list of drivers that have won with Yacco –my title sponsor- on board and a lot of exposure for my new Roure Compétition livery, which is the racing parts store that I will open in September!”

Now that Thibault Durbec is a winner in the French Gravel Rally Championship, will he be raising his objectives? “The season is very long”, cautions the Frenchman. “This win is gratifying after all the work that has already been done, but it is always harder to back it up. We will continue to work so that or future success will be even greater…If there will be others, because nothing is ever guaranteed in this sport!”